The historic, Federal styled town of New Market was founded in 1793 by two gentlemen of the area, Nicholas Hall and William Plummer. On June 1, 1793 the Town officially began when Nicholas Hall sold the first lots, thereby setting into motion the plan to establish a town beside the rough wagon trail, known as the Baltimore Turnpike.

Plummer and Hall fully realized the commercial value of the turnpike and therefore made a half-mile section of the road New Market’s Main Street. These astute men knew the Town’s location, toll-free roadway and ample water supply would attract enterprising men and women to develop a place where travelers could rest, eat, shop, and trade.

The Town of New Market grew quickly as men with foresight immediately built homes, churches, schools and set up businesses to meet the needs of travelers moving along the difficult trek to and from Baltimore and beyond.

As early as 1797, the Town had a number of two-story log and brick homes. The Bush Creek Society of Friends established New Market’s first religious institution and school. In 1799, John Roberts built the town’s first hotel. 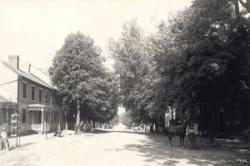 In 1818, the Baltimore Turnpike became the eastern section of the National Turnpike, one of the most famous and well-traveled highways in America. The Town of New Market became an integral part of the western trade route and the multitudes who opened America’s new frontiers passed through the center of town. The first stagecoaches carrying mail traveled Main Street. Over the road came heavy freight and Conestoga wagons loaded with grain, whiskey, tobacco, lumber, iron, furs, and other products. Passenger coaches and fancy buggies stopped at the hotels, inns, and taverns. Herds of cattle, sheep, and pigs were driven through to market. Peddlers came with carts and many traveled on foot carrying all they owned on their backs.

New Market remained an important stop for travelers until the mid-nineteenth century. When the railroad reached West Virginia and beyond, the traffic through New Market slowly declined until the the advent of the automobile in the 1890’s.

An act to incorporate the Town of New Market was passed by the Maryland Legislature and signed by the governor on March 28, 1878 In the same year, Issac Russell was elected the Town’s first Mayor.

On December 6, 1975, the Town of New Market was placed on the National Register of Historical Places and under the supervision of the Department of the Interior.